From our room at Hotel Signum, Salina.  Panerea in the distance.

Hotel Signum‘s celebrated restaurant — Sicilian cuisine — with one of Salina’s six volcanoes behind.

Guy Wiggins teaching the kids that it’s all one big poker game. 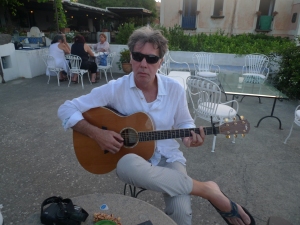