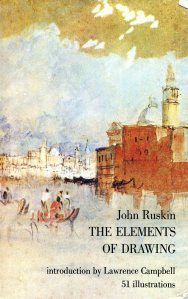 The Elements of Drawing by John Ruskin

“Now a stupid painter would represent, for instance, a drinking-glass beside the hand of one of his figures, and because he had been taught by rule that ‘shadow was darker than the dark side,’ he would never think of the reflection from the glass, but paint a dark grey under the hand, just as if no glass were there.  But a great painter would be sure to think of the true effect, and paint it; and then comes the stupid critic, and wonders why the hand is so light on its dark side.

O.K. that’s enough Ruskin for now.  I’ll save the second bit for another day.