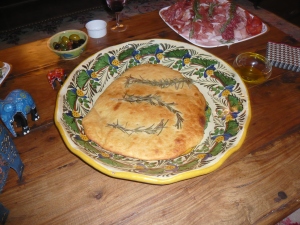 Saturday night the amazing and inspired Debbie Stier of Harper Studio organized a wonderful group of people that care deeply about the future of books and who are all carrying them forward, in one way or another, into the 21st Century, with the help of the internet.  I hosted the soiree at my apartment with Debbie and my husband.  A collection of writers and readers and thinkers and dreamers and makers and doers.  It’s been a long time since I’ve been in a room filled with strangers all of whom I wanted to speak with. Jonathan Fields and Dani Shapiro talked about social networking, how one must enter it in the spirit of being helpful or useful in some capacity. Readers easily sniff out mercenary motives. Sometimes writers misuse Twitter, for example, when they have a book come out. They start tweeting about their book tour, etc, and they clearly haven’t invested any time in establishing a community—of offering anything to the community. “It would be like walking into a party like this and, after two minutes, trying to sell you something,” said Fields. In short, the community, and one’s investment in it, comes first. The trick is to find something you want to spend time writing about, as a community member, and be of service to that community. Dani Shapiro has been writing about issues that writers face. Jonathan has been helping people re-think their ideas of entrepreneurship. Both are areas of interest each has anyway. When one of their books comes out, it’s just something else added to the mix.

I love collecting people and then feeding them.  I wanted to keep it simple so I ordered wine from Whole Foods Wine Store, on Columbus and 100th Street using Veronica there to help me choose.  She has a vibrant vocabulary for wines, making them all sound exquisite: “It’s like a Sauvignon Blanc that’s gone on a tropical vacation,” she said of one white.  I made focaccia and ordered plates of various salumi from Salumeria Rosi, my new favorite restaurant on Amsterdam and 73rd in NYC.  The focaccia recipe is my friend Dodi’s and it is easy and very forgiving.

Click Soiree with Focaccia to watch a slide show of focaccia preparation, before the guests arrived.  Ron Hogan is pictured.  He was the first to arrive. We promised to take pictures, but were too busy having fun to think about the camera…

Recipe for Focaccia—easy and forgiving

Let yeast activate on top of warm water for about 10 minutes.  Add all ingredients.  Stir to combine.  Let rise for 1 1/2 hours covered with a cloth. Line a baking sheet with parchment paper.  Pour dough onto parchment, patting down with wet had.  Sprinkle with sea salt and fresh rosemary.  You can chop it.  I don’t because I end up being too lazy or in too much of a hurry. Cook at 425 for 10 minutes.  Reduce heat to 400 and cook for another 20 minutes.  Drizzle with olive oil after removing from oven.  Serve immediately.   If you have leftovers, it’s so good for breakfast dipped in warm milk.

Some of the people who came:

At some point, Mark picked up his guitar. Constantine ran to get his harmonica and they moved on into “Fulsom Prison,” with Kamy swooping in on harmony. They stayed until midnight sharing some of their favorite music: Low, The Dimes, a terrific band from Portland, Oregon, and Jose Gonzalez, among others.  And after talking to Constantine, we’re now dreaming of a trip to Cypress from where Constantine’s family comes.

After Saturday night, surrounded by these astonishing people, I feel exhilarated, hopeful about the future of the book.

3 thoughts on “Soiree with Focaccia”