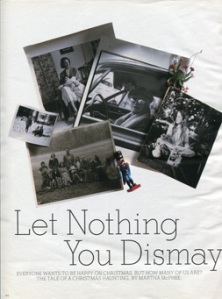 In my mother’s basement, the Christmas after my grandmother had died, I found the top of a box that had belonged to her. My mother and I were down there retrieving ornaments and lights so that we could decorate the tree, a painful Christmas that year, 1995. My stepfather had died not long before my grandmother. The box top — 18 inches by 18 inches, watermarked, frayed and torn — had once covered a wreath, but the wreath was long gone, and now the box held ornaments, each one neatly wrapped in tissue. I lifted the lid off the box, and immediately I noticed my grandmother’s handwriting, a jumble of words that spilled out to fill the room. My mother would later tell me that she had known about the box top but had never read it, that after seeing her mother’s handwriting she had shut the lid: Pandora’s box. But I could not shut the lid. I had to know what was written there.

From the T Section of The New York Times — written a couple of years ago; it’s a seasonal favorite of mine and wanted to share again.