I come from a long line of women who worked as hard as they knew how to get themselves out of whatever misery they found themselves in. Grammy, my mother’s mother, was the keeper of these stories, narratives propelled by women. Nancy Cooper Slagle’s husband died in Libby Prison during the Civil War. She had just given birth to their seventh child. Poor and a Yankee in the Confederate South, she swaddled the baby to her chest and left Richmond, hiking with the children over the Alleghenies to the safety of her husband’s family in Ohio. Her son, Albert, eventually married a milliner from Cincinnati, Laura Ann Slagle, a little blip of a woman with a congenital hip defect. Her parents saw no marriage prospects for her, but her talents with feathers and beads, intricate hat designs saw her to a career and then to catching the eye of Albert.

Their daughter Glenna, my great grandmother, upon discovering her husband in bed with his lover, left Ohio for Montana in 1910 with her two daughters to create a new life of her own. Taking advantage of the Enlarged Homestead Act of 1909, understanding that the westward expansion would bring families and children and a need for teachers, she became an itinerant school teacher. It didn’t matter that she didn’t have a degree. She would leave her daughters alone for long stretches of time.

Grammy, the oldest of Glenna’s two girls, figured out how to raise herself and her sister. Impoverished, gunnysacks for shoes in those cold western winters, she learned to cook, take care of a home, do what needed to be done while making sure her sister went to school. Grammy didn’t go to high school, but that didn’t stop her. “If I don’t like something the way it is,” she would say, “I simply say it as I would like it to be.” She took her sister’s name and diploma, used it as her own to get herself into the nursing program at Brooklyn Hospital.

Grammy had a daughter Pryde, my mother, and when her marriage fell apart, four daughters under the age of ten, she didn’t know how to write a check. But she managed to figure out how to start her own business as a photographer in Princeton, NJ and for forty years she photographed weddings and portraits of families in the happiest moments of their lives, thereby providing for us, her daughters.

Mom’s  basement is now filled with tens of thousands of negatives, proof of how hard she worked to get us from there to here. And here I am now, in her home, escaping the city during the pandemic, fretting and fearing for our world, my children, their futures, our futures as I learn to grow a garden and raise baby chicks. On the threshold of publishing a novel, inspired by Grammy and these formidable women, scheming and dreaming of ways to help the novel get into the world in these uncertain times, I feel the strength of these women behind me. They were not always lauded, often even vilified as can happen to strong, intrepid women—but they did what needed to be done. And I am one of them too.

“By hook or by crook,” my grandmother used to say—meaning that is how we go forward. When I was a girl and had gotten into some pretty  serious trouble, Grammy drove down to New Jersey from her home in Maine, arriving in her black Lincoln Continental, that big boat of a car, to tell me that she loved me. “You can lie and cheat, you can kill even and I will always believe in you.” By hook or by crook, we will make it out of here.

Inspired, as always, by Jenny McPhee

Today, April 11th, is my grandmother’s birthday. She would be 116 years old. She wanted to live to be 105 because she was competitive and wished to out live her great grandmother, Nancy Cooper Slagle who lived to be 104 and was the oldest in our line. Grammy didn’t make it, died at 91 in the hot August of 1995. Nancy, Grammy would tell us, her granddaughters, was the cousin of the great James Fenimore Cooper. We believed that for a very long time. It was not the truth, but she didn’t care. “If I don’t like something the way it is, I simply say it as I would prefer it to be.” She learned that concept growing up poor in Montana.

I’ve returned to my childhood home to care for my mother during the Virus. I’m sleeping in Grammy’s room, as we like to call it, left pretty much as it was when she died. Her beaver coat hangs in the closet along with her long fuchsia “opera” coat and a floor-length wool cape that fastens with silver buckles. On the walls are portraits of our ancestors, Grammy’s mother, sister, cousins, myself and my sisters as girls, my mother as a bride. It’s a room of many generations of women. I’m inside our family history and it is both compelling and terrifying as I am not a huge fan of time. Looking at the image of me as young girl, a pastel portrait commissioned by my grandmother because important people did this sort of thing, it is easy to feel that I am already an ancestor.

But I am not yet an ancestor. I am alive and trying to learn new things–gardening, chicks. I’ve written a fifth novel, An Elegant Woman, arriving on June 2, which uses my grandmother’s life and the stories she told (and others that she didn’t) to explore what it means to make a life and then to pass it down. Here, on her birthday, I am awed that this room has been left untouched since 1995, some twenty-five years (Lordy) not because she might come back to it, of course, but because the opera coats and the beaver fur and all the pictures are still telling their stories.

If you want to know how she got out of an impoverished childhood in Montana and into a Lincoln Continental in New Jersey, you can pre-order An Elegant Woman today–and I would be very grateful. These days, it is easy to forget that I have a novel forthcoming, and then this magically appears:

“In these difficult times, we do need a big, involved, warm-hearted family saga. This is a great distraction and a wonderful story of a family’s changes throughout the twentieth century. Through good times and very tough ones, these characters are always engrossing and usually entertaining. A lovely and much needed diversion.”—Anne Whalen, Brown University Bookstore

As always, inspired by Jenny McPhee 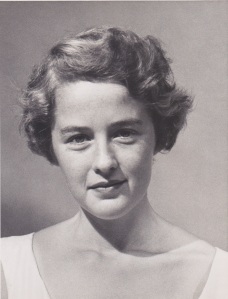 My son says to me: “You are so lucky.  You have the best mother in the world.  I wish Nonni was my mother.”

He’s right.  And this is “Nonni” just about the time she started having children, age 22. 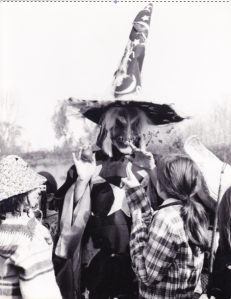 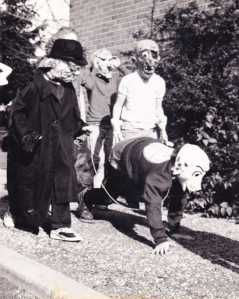 I love these costumes.  The scary man walking his dog, the ghost with his finger in his mouth, the wizard witch with the poison apple in hand.  My mother took them when I was in kindergarten.  I haven’t thought about them in years until I found them while cleaning out a drawer.