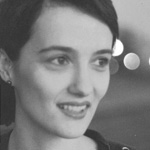 The other night my younger sister, Joan Sullivan, was honored by the Bronx Academy of Letters for being its founding principal.  She is now Deputy Mayor of Education for the City of Los Angeles.  This is the speech she delivered:

I want to get one thing straight. This school was not founded by me.

The school, itself a political act, was founded by a long series of political movements that erupted in the 1960s. It was founded by The Young Lords, who took over hospitals and churches to demand that they operate programs for the poor and who led campaigns to force the City of New York to increase garbage pick-up in neighborhoods like ours, ones that suffered from chronic institutional neglect.

This school was founded by Piri Thomas, a Puerto Rica-Cuban born poet and freedom fighter, who was raised in the barrios of New York and whose name is emblazoned on our school’s walls.

I’m on stage, honored of course by this award, but this school does not belong to me.

The Bronx Academy of Letters is based on the word and sits in the community that gave birth to Hip Hop. The school belongs to KRS-1, a man who continues to use music to fight for social change. This school belongs to the Bronx.

I can’t take credit for this school. This school belongs to its stakeholders.

–       It belongs to immigrants from the Dominican Republic, China and Ghana who saw school as the avenue to success and brought us their brilliant children.

–       It belongs to students who, out of boredom and frustration, spent decades protesting poorly run and resourced classrooms.

–       It belongs to Qian, Stacey, Jeffrey, and Lucelys who graduated first from the Bronx Academy of Letters and who are now preparing to graduate from Skidmore, Wesleyan, Ithaca, and Columbia.

–       It belongs to our teachers, who are scientists, writers, dancers, athletes, and scholars and who have put every drop of their art and genius into their teaching.

This school belongs to all of you, our supporters, who saw that the young people living across the Madison Avenue Bridge in the South Bronx were not only part of your community, but also a part of your future.

If this school belongs to me at all, it belongs to my mother who with her indomitable will, bribed me to read books as a child until I found Roald Dahl and became a willing reader and a capable writer. And to my father, who believed in fairytales and who, when I was five and asked to go on a picnic in a blizzard, took me down to the banks of the Delaware River and set up a picnic in the snow. And to my 9 sisters and brothers, who played so beautifully with ideas and whose books and politics imbued me with a determination to fight and the courage to hope. And to my wife, Ama, who has revealed with her intellect and spirit such a joyful world to me.

All of this is to say that the idea of a founder is a farce. We have all founded this school that continues to be found every day by students, teachers, parents and you. This school belongs to you—which is a gift, a promise, a responsibility.

Because anything that is found can be lost, lost to financial and budget crises, lost to layoffs that disproportionately affect our poorest neighborhoods, lost to those who forget that the Bronx Academy of Letters and its children areour legacy.

And there are more things yet to be found. We need more than a good school. We need lots of good schools. We need them here and in Los Angeles. We need affordable college access and to begin talking not about K through 12 but about Pre K through college. Just as we, together, found each other and this school. We can find strong school systems and turn these into strong communities, knowing that we will never have strong communities without strong schools.

This sounds impractical, untenable. So was the Bronx Academy of Letters. So was the idea of opening a school in America’s poorest congressional district with an open admissions policy and with the goal of sending its graduates to our nation’s best colleges. So is my request of you tonight. I ask that you take joy in and responsibility for founding this school. I ask that you continue finding this school and that you remember that its students will find the things we lost and the things we never even believed to be possible.

There is one other thing. You should know that this school also belongs to our new leader. A woman I interviewed right here in the Italian Academy before hiring her as our school’s first teacher. A woman who started building and leading with humility, integrity, and passion before our doors even opened. A woman who proposed and then assembled our middle school. An inspired English teacher, a devoted advisor, an award-winning poet, a friend and mentor. Please join me in welcoming the person who has now worked for this school longer than any other, Principal Anna Hall.

On Thursday, May 13 at 6:30 PM the Advisory Board of the Bronx Academy of Letters will be honoring my youngest sister, Joan Sullivan, at the school’s 8th Annual Benefit.  Joan is the Founding Principal of the BAL, a former All-American lacrosse player at Yale University.  She was recently appointed the Deputy Mayor of Education for the City of Los Angeles.  She is also a brilliant and inspired speaker.

She began the BAL, a New York City public middle and high school, 8 years ago with the simple idea that she wanted to give to her students some of the best things she had had as a student: quality education; chances to travel; a strong library; a vibrant music and drama program; serious athletics; and most of all a path to college.  And she wanted to bring all this to under-served students in the South Bronx.  When she left the school for her position in Los Angeles she left behind a thriving well-structured school.  But it continues to need all of our support so that all the extras that make for a complete and rich education can be afforded these students.

The event will be held at the Italian Academy at Columbia University, and will include a chef tasting featuring some of the city’s finest chefs: Marco Canora (formerly with Craft), Andrew Carmellini (most recently with A Voce), David Chang (Momofuku), Gabrielle Hamilton (Prune), Pino Luongo (Centolire) and Julian Medina (Yerba Buena).

I promise it will be a great time while also supporting a great cause! If you would like to purchase a ticket ($150) for the event on May 13, please click on the link below. 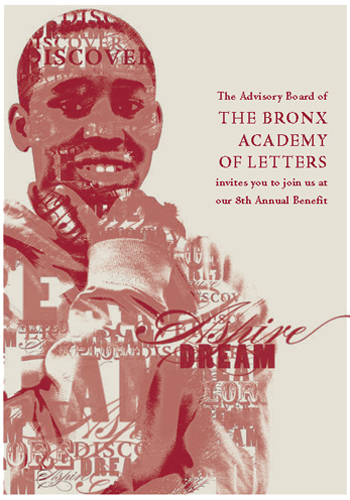 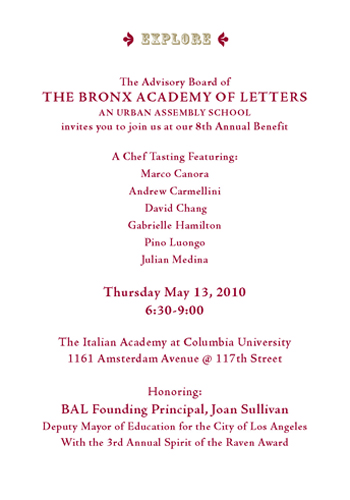 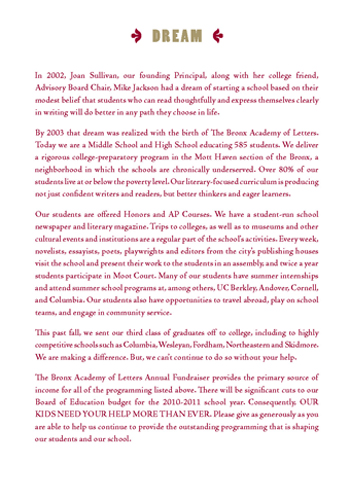 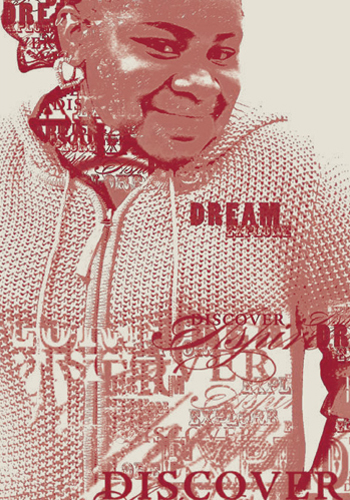