In a world where everything has changed, I find myself launching my fifth novel. The challenges and hardships that this pandemic has brought for so many people seem beyond measure, yet even so the world continues to turn.

So, of course, it’s time for a cocktail.

I worked on An Elegant Woman for ten years, and now I celebrate its publication with a virtual launch party at The Center for Fiction. The best news of all is that the brilliant, talented Julia Phillips will be there to discuss the book with me. Her acclaimed, bestselling novel, Disappearing Earth, is just now out in paperback. Please come on June 2 and raise a glasss with me–perhaps a glass of this dangerously delicious cocktail, with cucumber and basil which I’ve already tried out a few times. I would so love to celebrate with you.

Thank you Sally Howe and Scribner Books for making this possible.

I come from a long line of women who worked as hard as they knew how to get themselves out of whatever misery they found themselves in. Grammy, my mother’s mother, was the keeper of these stories, narratives propelled by women. Nancy Cooper Slagle’s husband died in Libby Prison during the Civil War. She had just given birth to their seventh child. Poor and a Yankee in the Confederate South, she swaddled the baby to her chest and left Richmond, hiking with the children over the Alleghenies to the safety of her husband’s family in Ohio. Her son, Albert, eventually married a milliner from Cincinnati, Laura Ann Slagle, a little blip of a woman with a congenital hip defect. Her parents saw no marriage prospects for her, but her talents with feathers and beads, intricate hat designs saw her to a career and then to catching the eye of Albert.

Their daughter Glenna, my great grandmother, upon discovering her husband in bed with his lover, left Ohio for Montana in 1910 with her two daughters to create a new life of her own. Taking advantage of the Enlarged Homestead Act of 1909, understanding that the westward expansion would bring families and children and a need for teachers, she became an itinerant school teacher. It didn’t matter that she didn’t have a degree. She would leave her daughters alone for long stretches of time.

Grammy, the oldest of Glenna’s two girls, figured out how to raise herself and her sister. Impoverished, gunnysacks for shoes in those cold western winters, she learned to cook, take care of a home, do what needed to be done while making sure her sister went to school. Grammy didn’t go to high school, but that didn’t stop her. “If I don’t like something the way it is,” she would say, “I simply say it as I would like it to be.” She took her sister’s name and diploma, used it as her own to get herself into the nursing program at Brooklyn Hospital.

Grammy had a daughter Pryde, my mother, and when her marriage fell apart, four daughters under the age of ten, she didn’t know how to write a check. But she managed to figure out how to start her own business as a photographer in Princeton, NJ and for forty years she photographed weddings and portraits of families in the happiest moments of their lives, thereby providing for us, her daughters.

Mom’s  basement is now filled with tens of thousands of negatives, proof of how hard she worked to get us from there to here. And here I am now, in her home, escaping the city during the pandemic, fretting and fearing for our world, my children, their futures, our futures as I learn to grow a garden and raise baby chicks. On the threshold of publishing a novel, inspired by Grammy and these formidable women, scheming and dreaming of ways to help the novel get into the world in these uncertain times, I feel the strength of these women behind me. They were not always lauded, often even vilified as can happen to strong, intrepid women—but they did what needed to be done. And I am one of them too.

“By hook or by crook,” my grandmother used to say—meaning that is how we go forward. When I was a girl and had gotten into some pretty  serious trouble, Grammy drove down to New Jersey from her home in Maine, arriving in her black Lincoln Continental, that big boat of a car, to tell me that she loved me. “You can lie and cheat, you can kill even and I will always believe in you.” By hook or by crook, we will make it out of here.

Inspired, as always, by Jenny McPhee 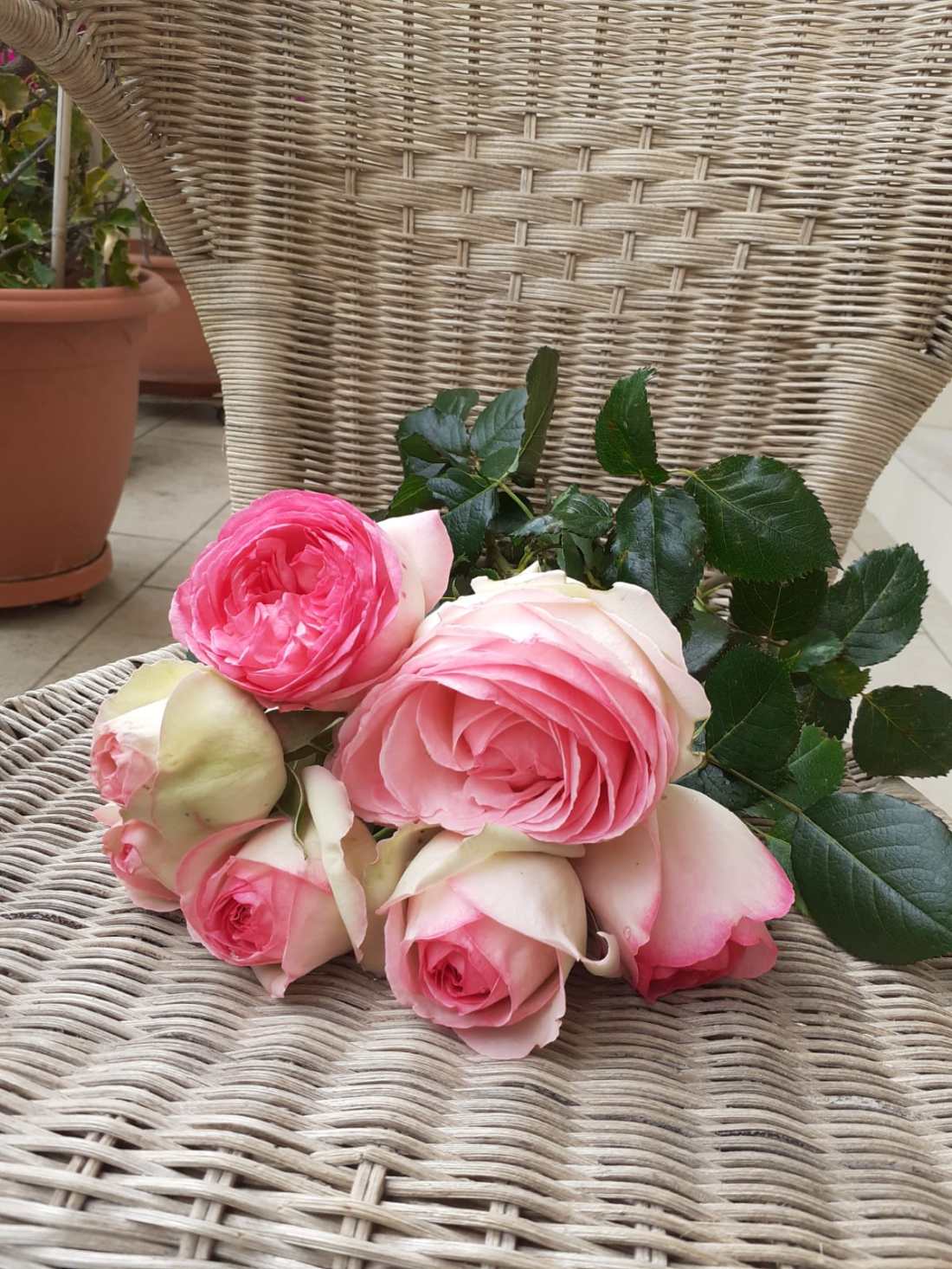 A richly animated work, McPhee’s enthralling new novel glides through American history, from early-twentieth-century Billings, Montana, to a Prohibition-era Adirondacks lakeside retreat and beyond, alongside fabulous characters. Sorting through the family home in present-day New Jersey, Isadora, a novelist, tells her late Grammy’s story as she would have wished, mingling realistic happenings with embellished ancestral lore. As a stocky child standing with her pretty younger sister, Katherine, on an Ohio train platform in 1910, awaiting their long journey to Montana with their mother, Thelma “Tommy” Stewart seems unlikely to develop into an elegant East Coast matriarch, but circumstances drive her to become a mistress of self-invention. This quality she picks up from her mother, the fascinating Glenna (“cultivation and wilderness combined in her”), who takes charge of her own life, even depositing her daughters with kindly neighbors while away teaching in a tiny Western town. Later, Tommy raises Katherine alone; while her sister attends school, Tommy earns money by begging and selling coyote pelts. Both make choices that shift their paths in surprising ways. The frequent mentions of hereditary artifacts feel overdone at times. Overall, however, McPhee elevates the generational saga into a dazzling, artfully detailed presentation of self-determination, women’s responsibilities and freedoms, and how people craft family legacies.

Two sisters: one beautiful, the other not. Little girls, five and three years old, they wore red velvet Christmas dresses and rabbit furs, waiting on the platform with their mother and her violin, for the train that would take them from Ohio to Billings—“Magic City,” as it was called, because it blossomed overnight.

On Last Morrow’s kitchen wall hung a family portrait that included that little girl, grown up and so old her faced looked like a dried-up apple. I was a little girl myself then, and it was impossible to imagine that I could ever be that old. 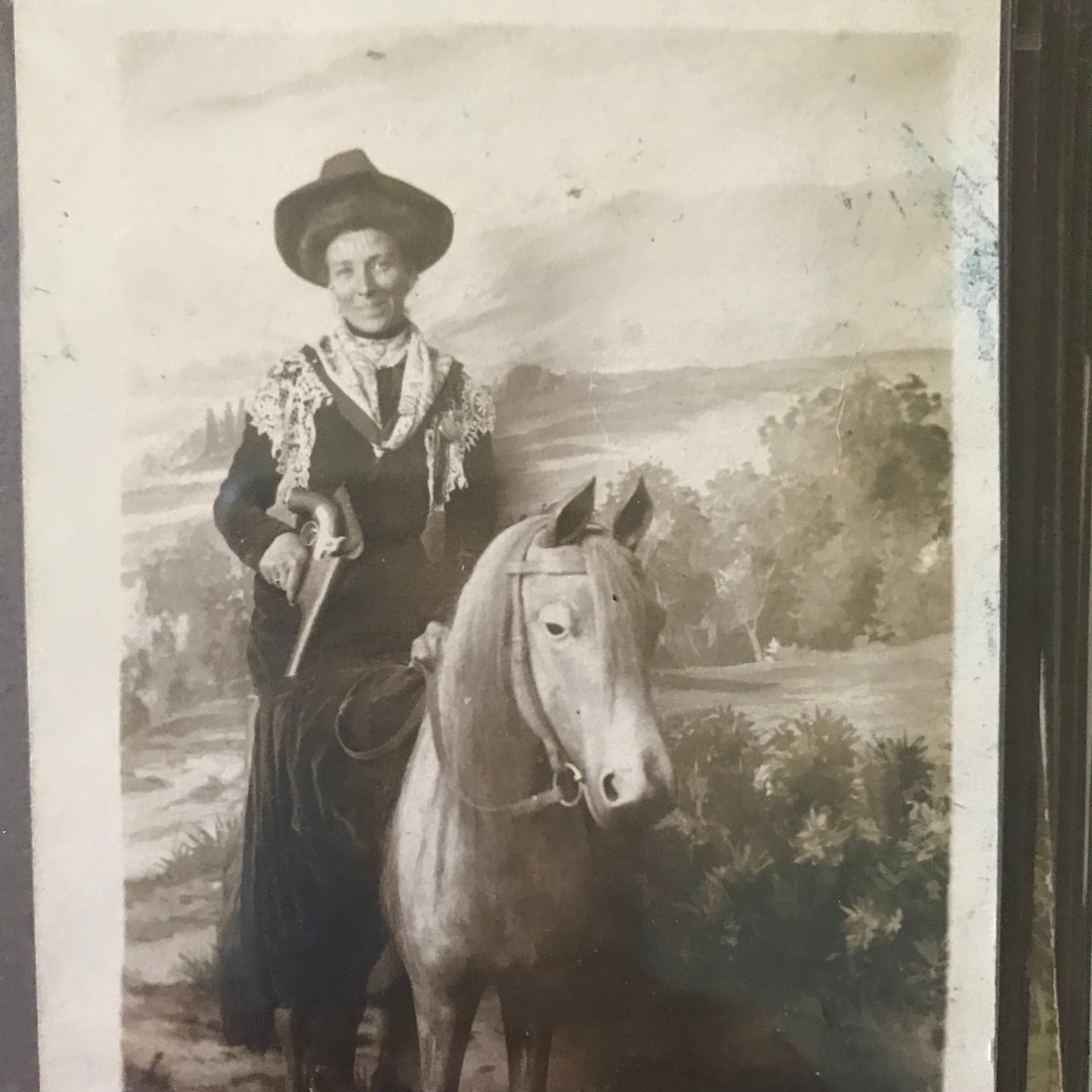 If Glenna were a constellation, you would see her in her white teacher’s smock, striding westward across the dew-wet grass of Montana, a rifle in one hand, Temple’s Notes to Shakespeare in the other. There wasn’t room in the sky for a husband with a wandering eye, but that was where stories came in, to fill out an evening, to ask about duplicity and betrayal, the steady march of self-compromise that led to whatever cul-de- sac of banality one found oneself in—and then to wonder about what a genuine hero would do about such things. 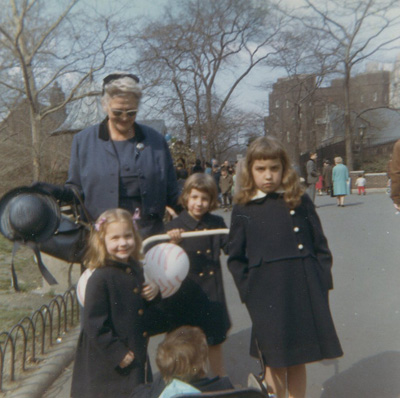 She would pause in her stories, ask one of us girls to get her smelling salts. “I feel faint,” she would say. And from her vanity one of us would snatch the small silver container filled with ammonia so she’d keep telling her stories. With a sniff of it, she’d sit up straight again, the bulk of her with those green, green eyes, eyes that could hold a child, midbreath, between the future and the past. “I’m not long for this world,” she’d say, like a prophet. “You need to know from where you came and to whom you belong.”

My grandmother had snow-white hair that she wore like a crown. Her exacting eyes were a startling emerald. Her large, sturdy frame seemed a fitting home for her strong opinions. She dressed impeccably in tailored suits, wore motoring gloves, netted hats, diamonds from Tiffany’s. Her snakeskin pocketbook fastened with a golden clasp, and when opened, the cinnamon scent of Dentyne wafted from within. On the dashboard of her black Lincoln Continental was a golden nameplate that read: Mrs. Charles Mitchell Brown—another name in a long line of borrowed names. She was Tommy; she was Katherine; she was Mother; she was Mrs. Brown; she was Aunt Thelma; she was Grammy. She wanted to live forever, or at least outlive Nancy Cooper Slagle, her great-grandmother, who lived to be 104 years old. 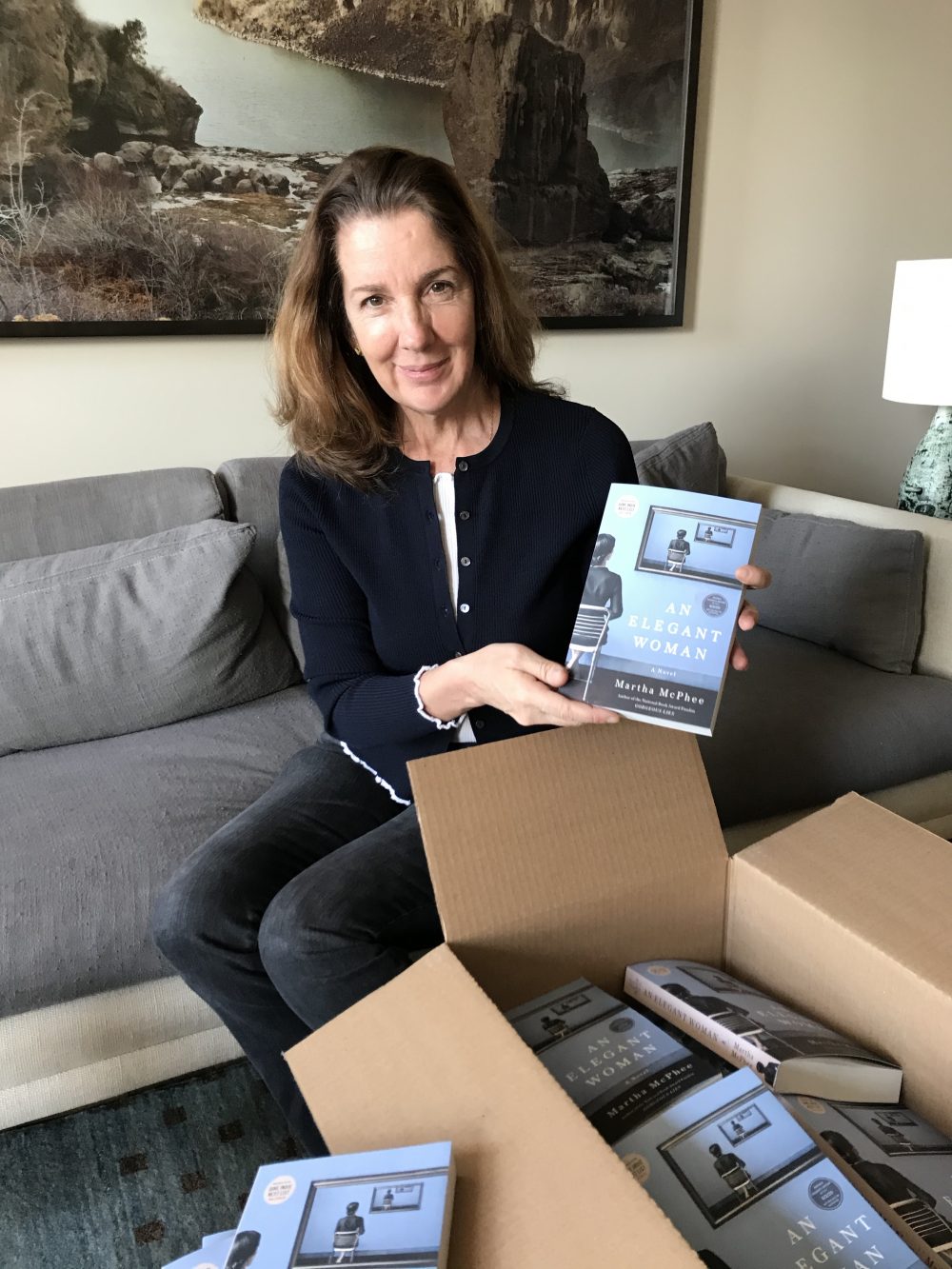 Today I received a heavy box in the mail, and I wondered what my kids had ordered without asking. To my surprise, the box contained Advanced Reading Copies (ARCs) of An Elegant Woman—such a beautiful cover and so many copies. I hadn’t felt that thrilling sensation of seeing a work of mine so composed, so ready to be read, in years. Ten years to be exact.  In January of 2010 I received a similar box containing Dear Money, my last novel. My daughter was ten and my son was six; I was younger, too. My mother didn’t yet have dementia. Dear Money was my third book in a decade. I didn’t yet have teenagers. I hold An Elegant Woman in my hand, and the past ten years come rushing in—the challenge to write the novel, the fight for time while taking care of teens and a sick mother, the slow pace of the words making their way from my brain to the page, the false start, the long revision, the clobbering self-doubt. I had a professor who described that kind of self-doubt as “your shit bird.”  “Swat it away,” he’d say. Swat and swat and swat, but the little shit bird kept landing again on my shoulder, a little bop-bag doll. Finally, somewhere along the way, with the encouragement of a patient, trusting, and believing editor, the characters took over. The book has a lot to do with stories my grandmother used to tell me about her life, her childhood, our ancestors, the way she made it from poverty in Montana to a bourgeois life in New Jersey. Across the years, I’d scribbled notes, first while she was alive and then after she was dead. I followed those notes like bread crumbs, followed them from Ohio to Montana to New York, Maine, to New Jersey—her life against the backdrop of the American landscape and the 20th century.  Word by word, I followed her lead, and now I have a book. That’s how it is done, bushwhacking, swatting away at the bird. But the view from here now is very beautiful.