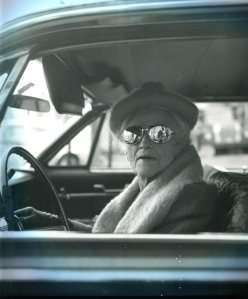 Speaking about fiction….  My grandmother comes to mind this morning.  She used to say, “If I don’t like something the way it happened, I just tell it as I would have preferred it to have happened.”  An impoverished cowgirl in Montana, she worked so that her little sister Kathryn could go to school.  Their mother left their father when they were six and four years old in 1910, heading from Ohio to Montana so that she could be an itinerant school teacher.  When my great grandmother, Glenna, went off to teach in remote corners of the state, she left Thelma (my grandmother) to take care of Kathryn.  When Thelma was eighteen without a highschool degree but eager to go to nursing school in the east, she rewrote the narrative as she would have preferred it to have been.  She changed her name to Kathryn and used her little sister’s degree and records for her application to the nursing school at Brooklyn Hospital.  She was accepted.  In New York, she transformed herself into “a lady of quality.”  In the picture here she’s about 85, driving still her Lincoln Continental with a gold nameplate on the dashboard that read: Mrs. Charles Mitchell Brown III.

(If you look closely at Grammy’s glasses, you can see my sister Laura McPhee with her camera taking the picture.)

2 thoughts on “Montana Cowgirl Becomes A Lady Of Quality”