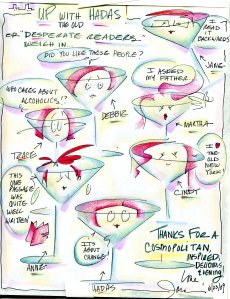 (drawn after our Paula Fox evening)

I was invited to join a very serious book group. There is no chat (or not much) of husbands, children, school, plastic surgery. Just the books. Since joining last January we’ve read: 2666 by Roberto Bolano (I was surprised to love this, to be swept into his wild imagination); A Bend in the River by VS Naipaul and his biography The World Is What It Is by Patrick French (Naipaul is completely nuts and brilliant); Joseph Mitchell’s Up In The Old Hotel (all together the pieces were too similar and some felt fabricated) alongside Desperate Characters by Paula Fox (captures an era in New York irresistibly); Don Quixote translated by Edith Grossman (what fun. I gave it to my father on tape, unabridged—he listened to it twice and bought the book so he could read it too); and finally How Fiction Works by James Wood and, because it inspired Wood, John Ruskin’s The Elements of Drawing. As I said in an earlier post a little bit of Ruskin goes a long way. But there are many delightful passages. I love that he is always distinguishing between the great artist and the inferior, that he has rules for everything and then tells you to disregard them.

“Now remember, nothing distinguishes great men from inferior men more than their always, whether in life or art, knowing the way things are going.

Your dunce thinks they are standing still, and draws them all fixed; your wise man sees the change or changing in them, and draws them so,—the animal in its motion, the tree in its growth, the cloud in its course, the mountain in its wearing away.”

“If a great man is not in a hurry, he never pretends to be; if he has no eagerness in his heart, he puts none into his hand; if he thinks his effect would be better got with two lines, he never, to show his dexterity, tries to do it with one.”

“The other laws, if you think over them, you will find equally significative; and as you draw trees more and more in their various states of health and hardship, you will be every day more struck by the beauty of the types they present of the truths most essential for mankind to know; and you will see what this vegetation of the earth, which is necessary to our life, first, as purifying the air for us and then as food, and just as necessary to our joy in all places of the earth,—what these trees and leaves, I say, are meant to teach us as we contemplate them, and read or hear their lovely language, written or spoken for us, not in frightful black letters nor in dull sentences, but in fair green and shadowy shapes of waving words, and blossomed brightness of odoriferous wit, and sweet whispers of unintrusive wisdom, and playful morality.”

I could write many more, but won’t.  He teaches the reader to be patient and to look, to observe, to care.

Last night, I made a roast pork loin infused with maple and sage and wrapped in bacon and served it with a Persian jeweled rice.  (The recipes will go up when I have time.)  For dessert: almond cake with raspberries and cream.  The almond cake recipe is on this site.

I’d like to add that we’ve only read one woman (Paula Fox) in the year I’ve been with this group.  This raises questions for me that I’ll address in a later post.  In the meantime, please look at the comments on my previous post to see the beginnings of this discussion.

One more by Jane Gennaro