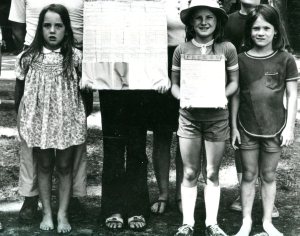 Vanessa was 4, Katherine was 6 and I was 5 when our parents fell in love and we became sudden, surprise sisters.  It’s not that I needed any more sisters.  I had 3 older sisters and 2 other (also older) new sisters belonging to my stepfather.  But Katherine and Vanessa were different.  They were so close to me in age—little girls with cool clothes and toys and who loved the same music (Diana Ross and Elton John).  They moved into my life, my house, my school.  On weekends with my father I was now put to bed with little, adorable Nessy. My father would tell stories, created just for the two of us: The Adventures of Farta and Vanasty.  We were a pair of traveling girls, flying across the world in our own small airplane with piles of cash that would get us into and out of trouble.  We didn’t want to fall asleep, though inevitably we did, longing for the next installment so we could see what became of us—how we paid off the crook just in time, fleeing into the bright blue sky.  But somehow he was on our tail, in his own small aircraft, gaining ground, with a scheme to entrap us.  Goodnight!  In the summer, Dad took us on our own special canoe trip, down the Connecticut River for an overnight camping, more Farta and Vanasty escapades.  I, being the youngest of the McPhee girls, now had Vanessa whom, I thought, I might be able to boss around.  My own little sister.  Not  a chance. 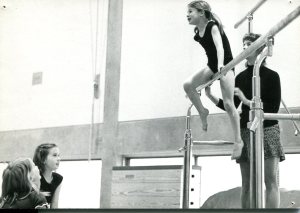 Vanessa on the uneven bars.  I, on the lower left, look up at her with admiration.

Rather I regarded Vanessa.  She seemed to know much more, as did Katherine.  They became closer to me than my own sisters at that time (just enough older, my sisters had moved beyond make-believe). It was with Vanessa and Katherine that I did many things for the first time.  We ran away together, sleeping in the back yard until it became too dark and scary and filled with strange, haunting noises.  We smoked our first cigarettes together.  We were 8, 9 and 10.  (Don’t tell my children.)  My father smelled the smoke in the garage and came out there and said to us, “If you’re going to smoke then smoke in the living room in front of us.”  We never smoked again—well sort of.  We played a game called “Normal Day” in which we tried to sort out the adult world.  It was a game like house.  We were married to Paul Newman, Steve McQueen and OJ Simpson.  (OJ was everywhere—towels, sheets, commercials, dogs even were named OJ.)  Our homes were in the woods behind our house, forts made from branches and twigs, boulders for chairs.  We could stay in there forever.  We had loads of credit cards and long lunches and we exchanged husbands with astonishing ease, using sophisticated words like affair, adultery, tryst.   Normal Day.

Childhood passed and we started to move apart.  Vanessa began doing things before me.  she had her first serious boyfriend long before I had mine.  When high school finished, she moved far away to college.  She married.  She had babies.  She bought a house.  Katherine followed her.  I watched them from afar, always with the same admiration, as they negotiated the real adult world.  Now I only see them, at best, once a year.  But they are vivid and dear nonetheless, little girls the three of us in rhinestone t-shirts dancing across the living room to Goodbye Yellow Brick Road, which my own children listen to now, laughing, as we did, at the horny black toad.  Katherine and Vanessa, opening my heart, teaching me how much room is in there, how it is bottomless and boundless like that glove in the children’s story that all those animals can fit inside.

Katherine and Vanessa as adults, flanking Yolanda, my stepmother