Bob Griswold, handsomest cowboy in the Sawtooth’s, cut a willow branch with a knife, tied on some line and a hook, placed a bright red salmon egg on the end of the hook and let Livia drop it in Wildhorse Creek, in a pool close to the bank.  She pulled out three trout.  Bob made a campfire and set up a cast iron pan at the edge of it, on some rocks.  Livia, bitten, went back with her willow switch rod to catch another and she did, immediately.  Alone, she wasn’t sure what to do with the fish as it flopped about on the bank.  Another friend, Matt, showed her what to do, and then gave a lesson in gutting the fish.  Livia cleaned her own.  Others caught a river char, and Leandro McPhee, on his tenth birthday, caught the longest trout of all.  On a sunny bank of a creek in a valley of the Sawtooth’s, we ate butter fried fish with lemon.  I thought of my grandmother 100 years ago, a six year old, in Montana, in the wilderness, fishing with nothing more than a switch, catching dinner for her mother and little sister — in what was then, for them, with no money and little food, something of a necessity. 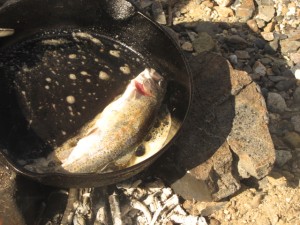 9 thoughts on “Rainbow Trout Caught With A Willow Switch Rod”